90% of the patients hospitalized with CHF (both systolic and diastolic) present hypervolemia detectable in the IVC resulting in the increase of the bi-ventricular load.

The IVC Balloonmatic device is designed to reduce the increased bi-ventricular load. The device reproduces artificially the dynamic stenosis of the IVC discovered by Dr. José Herrera during years of research, which, used on CHF patients they achieve notable clinical improvement.

Our device consists of a balloon catheter of one lumen for inflation and deflation. This balloon is oval in shape giving low resistance to blood flow. In addition the walls are modified, with increased thickness and grooves on the surface. It is made of a polymer, an anti-thrombotic material, reducing the risk of thrombosis from contact with the blood in the IVC. A one-way valve is located inside the lumen used to inflate the balloon so that once the balloon is inflated it will not deflate. 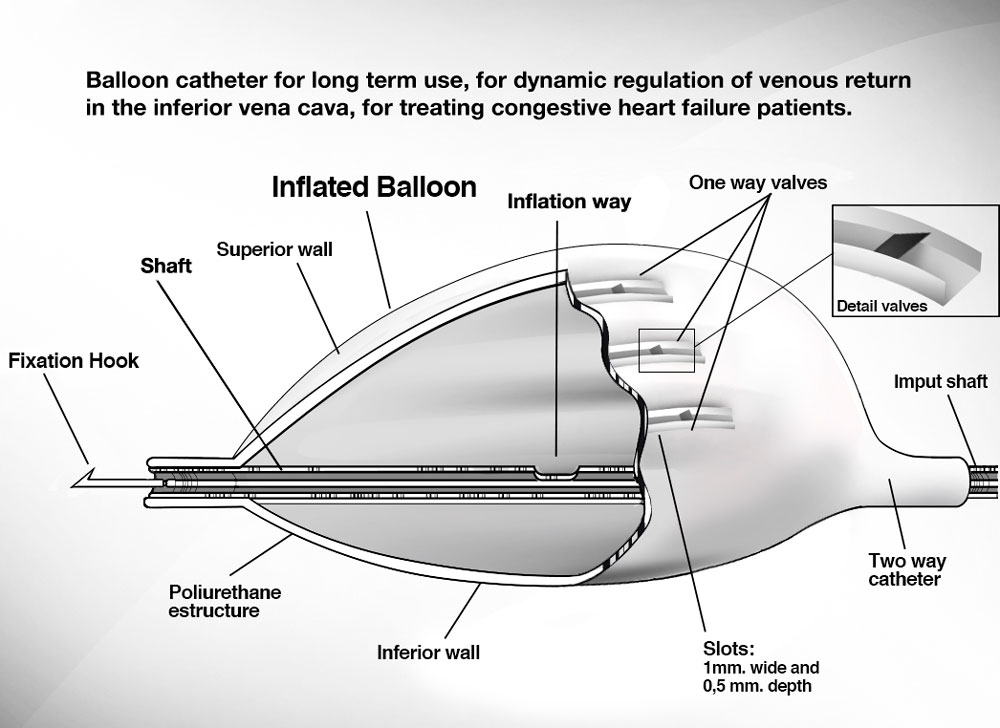 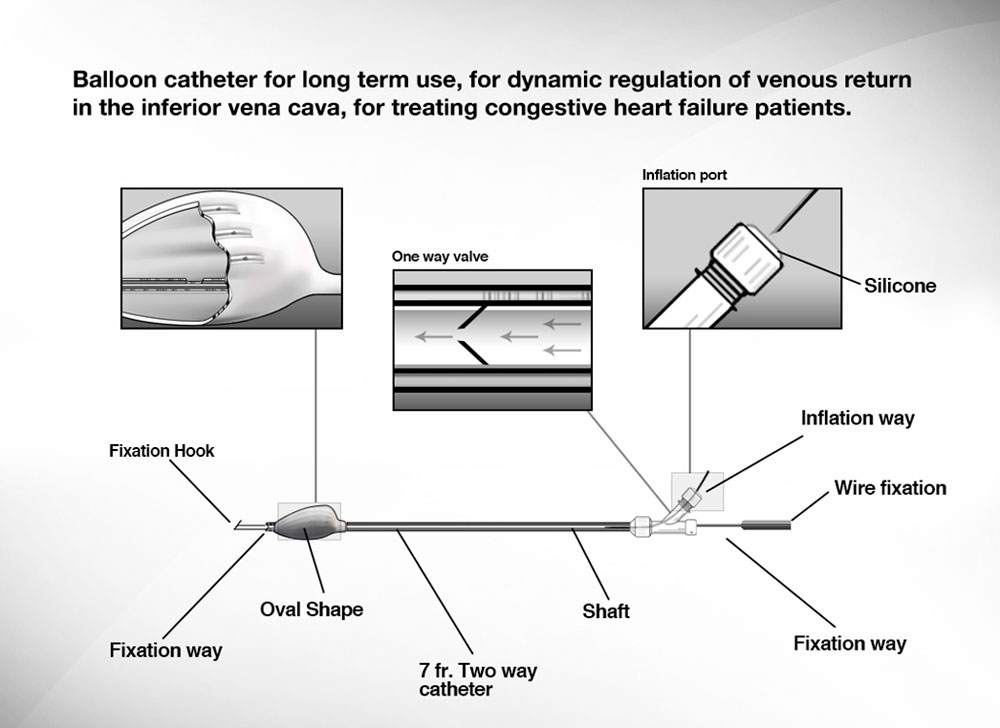 How do the method and the device work?

Once the catheter is introduced percutaneously using the Seldinger technique, through the vena sub-clavia, it is advanced along the superior vena cava towards the right atrium (RA), descending beyond the hepatic vein drainage. Once there, the balloon is inflated according to calculations made beforehand, taking into account the diameter of the patient’s IVC and the inspiratory collapse produced with inspiration. This method is supported integrally by the patient’s physiology producing, with each inspiration, a reduction of 30% on average of the area of the IVC and with the inflated balloon covering the remaining 70% there will be a total occlusion of 100%, during approximately 400 milliseconds producing an intermittent interruption of the flow by total occlusion of the IVC and subsequently, a subtotal occlusion during expiration, to again re-establish the flow of the IVC to the right atrium.

The consequence of this mechanism in the IVC is an intermittent reduction in the preload producing a fall in the auricular and bi-ventricular pressures, reducing in this way the load conditions of the chambers and producing a significant decrease in the pulmonary congestion, normalizing the ventricular filling pressure and, in consequence, a reduction in the tele systolic and tele diastolic diameters reducing the stress on the ventricular, barely affecting the Ejection Fraction and maintaining the cardiac output also increasing it in case of an important reduction in the mitral regurgitation volume due to annulus diameter reduction.

The intermittent regulation of the IVC flow takes the heart as close as possible to its natural design with a normal load of 70cc per m2 of body surface in addition to cardiac recovery (reversion of the remodelling) and deactivation of the neurohormonal axis due to reduced stretching of the atrium and ventricles as shown in the fall in the cardiac markers levels (PRO-BNP).

This device breaks with the previous method of treatment for CHF, and represents a new alternative to stop the progression of congestive heart disease, giving a positive prognostic implication. Here, the regulation of the preload is very effective done mechanically and gradually, which allows the changes made to be sustained for long periods. 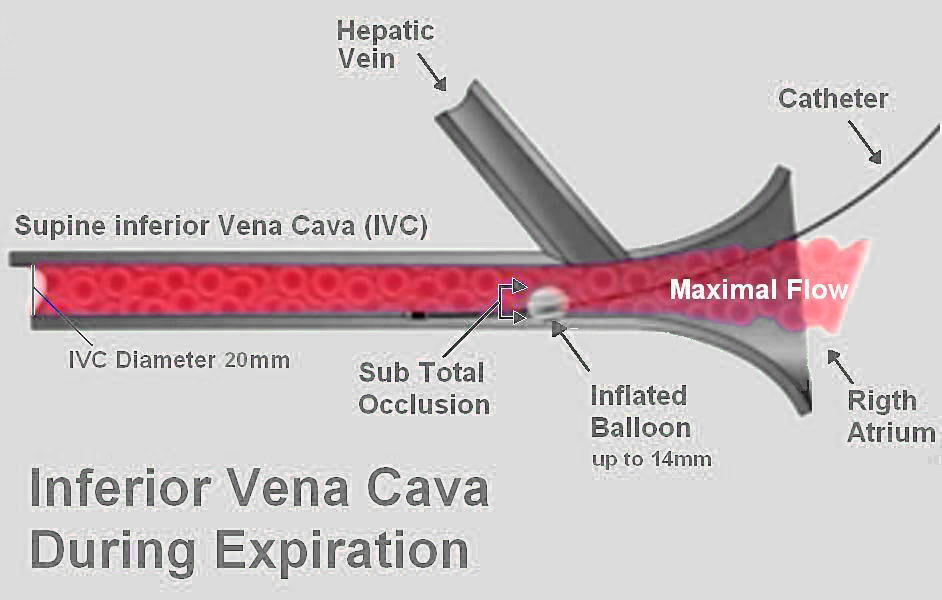 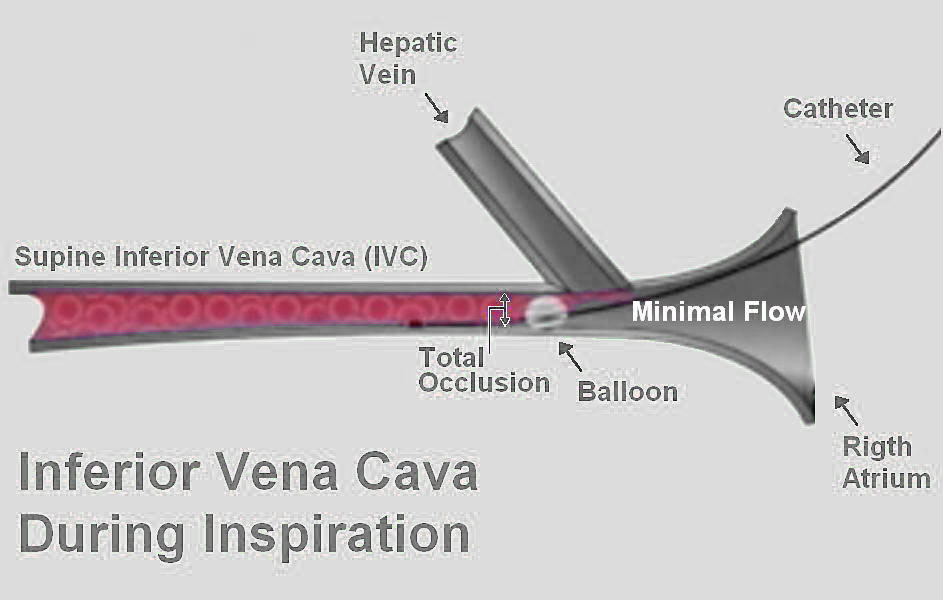 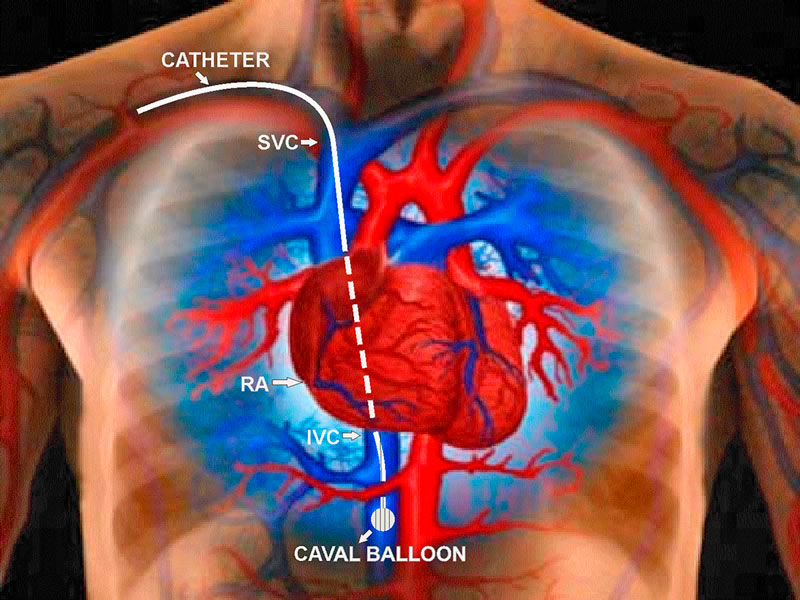 Evaluation of the method and the device

This method for regulating the preload has been evaluated using a prototype device consisting of a balloon catheter for venous occlusion through a protocol that governs the study in both ischemic and non-ischemic CHF patients, where beneficial hemodynamic changes were observed in the patients with the balloon implanted in the IVC for 30 minutes after an angiography provided indications of suspected coronary arterial disease. Six patients have been successfully treated without complications. The results open the door to the possibility of conducting pre clinical and clinical studies to evaluate the safety of this device in a greater number of patients over a prolonged period of time (3 months). The first case in humans was presented at the TCT/ACC Meeting in September 2014 in Washington DC.

We have made a comparison of basal hemodynamic modified by the reduction in the preload with the caval device obtaining more than satisfactory results.

Advantages of this method and device:

We have a work plan and have made significant advances to complete the development of this invention.

Get to know our work plan and progress